In order to reduce the energy cost of transport to and from its freezer room, supermarket chain Spar opted to install an AFIM IGLO® air curtain in its distribution centre in 2011. This high-pressure air curtain cold storage was delivered and installed by the company Air In Motion. The combination of the unique function of this high-pressure freezer room air curtain (AFIM® Air Doors) with active air drying not only prevents condensation and ice formation, but also considerably reduces energy consumption.

The advantage of a high-pressure air curtain cold storage is that it opens up the field of view and thus creates free passage for transport. Due to the high volume of transport going through this entryway, a strip curtain or high-speed door is not a viable solution. Furthermore, the AFIM IGLO® allows for the freezer room temperature to be maintained despite the fact that the door remains open for transport. This strongly reduces the frequency at which the evaporators have to defrost, which not only brings practical benefits but also considerably reduces energy consumption.

In 2011, Spar Holding built a new centre of distributions in the Harbour industrial zone, on land next to Harbour Seven that used to belong to the Swanenberg Iron Group. Apart from building the 23,000 m2 distributions complex with cold storage, Spar also moved its headquarters to Waalwijk. The entire complex was built by the construction company Aan de Stegge from Twello. All in all, the project came at a price of around 25 million euros. The previous distributions centre in the Moerdijk municipality (Zevenbergen) was too small, leading to operational inefficiencies.

The backbone of the Dutch Spar branch is formed by autonomous Spar and Attent retailers. All of the approximately 600 stores are supplied from two centres of distribution, namely the Northern centre in Alkmaar and the Southern centre in Waalwijk. Spar Holding is a perfect fit for Harbour Seven, which is increasingly shifting its focus to the logistics sector.

Together, the Spar Holding headquarters and cold storage complex employ around 300 people. Spar Holding moved into the new buildings in June 2011. 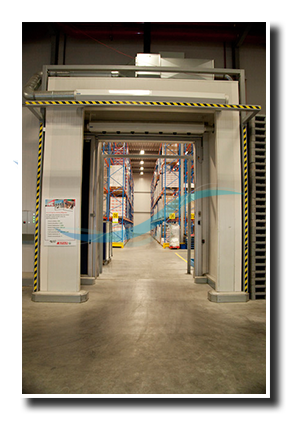 "Grandiose: a passage without snow or ice...."
"Through the Air Doors we save significantly on maintenance costs..."
"We are very pleased with the Air Door in our freezer room"
"We were skeptical, but the product has proven itself"
"Good solution and no risk of damage."
"We’ve provide all busy logistics cooling cells with Air Doors"
"Qualitatively good product and we keep cells at temperature"
"Significant improvement and the cold air remains in the freezers"
"Saving on energy and maintenance costs are our main arguments for AFIM Air Doors"